Last week I spoke at and attended the Reinvention Summit. It was a global online conference about storytelling. But it was more than that. It was for people wanting to take a deeper look at themselves, their businesses, their passions, and how to reinvent yourself in this fast changing evolving world.

I loved it. I hung out for every minute I could login into a talk. I’d join what was quickly forming as a community of people from across the globe. We talked in a live chat throughout each talk, adding value to presenters, to each other. Twitter ran hot at the same time.
I confess until now, I had thought the multi tasking, live chat world was really mostly for geeks or dating. But this was something of interest to me personally, and it was a global conversation with energy, that had the intimacy of a group of fired up people face to face in a room.
The conversations bounced, challenged, inspired and moved me. There were specific tips to act on, stories to reflect on, and a community that was pulling threads together for a better more connected world.
When I spoke, I talked about the New Zealand native bird, the Kokako, it’s beautiful song, and it’s place in Maori mythology Quick as a flash, someone in the Netherlands posted a link to a New Zealand site where you could hear the bird sing. I love that. It was playful and enriching.
There was a new dynamic to the conference, it wasn’t static, it was an evolving, revolving conversation, where there was also a tangible, palpable energy and authenticity. I feel I have formed as stronger friendship and connection with participants as I have when I have met people ‘in person’ at an energy rich conference or gathering.
The giving and taking was equivalent, and the live theatre with technical blips just simply added another dimension. Unplugged and live is the new polished performance!
So now I am comfortable with my media ecosystem, this blog, occasional tweets, facebook, I turn up as often in these spaces as I can and want to and do not worry about getting it right. It is organic, and as with a great story, powerful heart felt and inspired narratives trump over planned, calculated and manipulation infested communication every time.
In the early 1990s, I gave up journalism to work for an Auckland city council. I was attracted to a vision for a great future. Waitakere City will be familiar to New Zealand readers but for those further afield, or ‘overseas’ this little city declared itself an eco city, and led by a charismatic mayor, Bob Harvey embarked on a ‘sustainability agenda’ inspired by the Rio Earth Summit.
Trouble was nobody on the ground new what sustainability was.
But I loved the concept and as an eager storytelling radio journalist, set out to bring sustainability to life, in stories, video, cartoons, newsletters, illustrations, you name it.
One idea struck gold. I created and played a character, a TV reporter called Spud, who had crazy glasses, looked like a nerd, and constantly stuttered over the word suh… suh… suh… sustainability. The reports were humorous but told underlying serious stories about environmental, social and economic sustainability issues and solutions across the city.
It was an internal staff video, designed to build a culture in a divided organisation, full of a conflicting mix of visionaries and sceptics.
But people loved the video and the character. And still talk about it 15+ years on. It broke the ice, let people laugh at themselves and each other, from CEO to cleaner, and helped build a culture and a sense of family in the organisation.
It was an early experience for me about the power of story in building an organisation’s culture.
And a quick lesson about humour and its often hidden depths.

I used to teach journalism students. One part of the course I taught was how to write stories about different cultures, particularly Maori. We took a trip to an urban marae which, for international readers, are gathering places and meeting houses for Maori tribes.

The experience of staying at a marae involves everyone sleeping in the meeting house on mattresses around the room, and conversations and oratory occurs in the middle of the room. An elder spoke to us to start the session. Students were lying on their sleeping bags around the room. The first thing he said was: ” Don’t worry if you fall asleep, you will have learnt what you need to.” The students went: “huh” ? Fresh from the lecture room, under pressure to study hard to get their degree, being told to go to sleep on the job was a bit out there.
At the end of the visit, students said it was one of the most profound experiences of their course, and they had learnt so much about Maori culture.
As I take part in the online Reinvention Summit I am reminded of this. Sometimes the audio is not good, sometimes the technology is distracting and there is a delay on the line, but between live chat, blog links, tweeting, and sharing, I am getting the full picture. As one participant said, it is like live theatre the unplugged and unpolished nature of it is all part of the experience. I could leave the room for a cup of coffee, and never lose the thread.
A trusting way of learning, where the experience is already profound from the forum created. The ‘deeper’ levels are always between the lines; not always linear, not always logical, so I’m thinking I’ll schedule siesta as part of my Summit attendances.

I have some really insightful conversations with friends and family in the car. We are cocooned I guess and it’s surprising what comes up.

Last week I dropped my mother at the airport. She has heard me talk a little about my interest in story. She told me about her Christian discussion group and how they had been talking about how narrative and metaphor had been lost in Christianity and been replaced by doctrine. She found it sad that the magic and learnings from bible stories was often misinterpreted and turned into narrow sets of rules for living. There had even been emotional debate about Jesus and whether he was completely divine and a God, or a fallible human. We both agreed that these sorts of either/or conversations are really just academic, and that there is no right answer.
The synchronicity of this was fascinating as I have been looking at the same loss in the Maori world, where academia is for the elders stealing, and intellectualising their culture. The story, the meaning, and the soul is lost in translation.
I recall vividly the red pen markings and cynical margin comments on several university essays I wrote for using a journalistic writing style and the other for including unsourced references to Maori culture. So again as TS Elliot said, where is the wisdom we have lost in knowledge?
I have some great philisophical conversations with other family members in the car, and then on other occasions I can be consumed by road rage, at the behaviour of another driver, often for a maneuver I may have well done myself even earlier the same day. Irrational completely.
In that little box on wheels that I spent more time in than I would like, a whole world can occur; stories profound, petty, or problematic, but stories non-the-less.
I wonder if people are often frightened about whether stories are right or wrong. As a recovering journalist and PR Consultant, I now reflect on the years I traded in stories that were supposedly all about facts. The truth is they were always a perspective. I think we have shut down storytelling in many walks of life, opting for the so called rational and objective and pragmatic approach to information.
The truth as far as we can get it right is important, but it will always only be a perspective. It is time for us to look at what lies beneath a story, a communication, a narrative, a conversation, and listen to the intention of the speaker. The variations on facts and figures will often be there, but through conversation, collaboration and cooperation we can collectively gather facts and figures and the truth to go forward together.
We reinvent ourselves every morning, and the stories we tell ourselves, listen to, watch, and share will always be subjective, varied and flawed. We can find accuracy in the physics of nature, the elements and forces beyond our control.
Where I live is a small island in the South Pacific. New Zealand Aotearoa has a small population, although our lifestyle often seems just like that of places such as Britain, Europe, the US or Australia.
It is a country of settlers of many cultures who found their way here by sea, all over long distances. Sea journeys and stories are rich throughout all our cultures from Maori, to Polynesia, to European and beyond.
Navigation in nature and in life is a powerful metaphor. How do we gain some wisdom about navigating pathways to take in life, on land and on the sea? 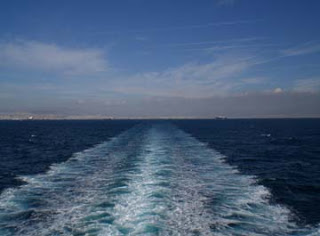 On the eve of the Reinvention Summit, I am thinking a lot about navigation and reinvention.
The ancient schools for Maori leaders were called wananga. Young men chosen as leaders were given a white stone, Hukatai, when they arrived and placed it in their mouth and symbolically swallowed it. This represented sea foam made by the bow of a canoe, and stood for knowledge as facts picked up along a sea journey, an unorganised set of ideas. When the student graduated, he would place a red stone, Rehutai in his mouth. This represented seaspray from a canoe heading into the sunrise. Seaspray throws up a prism of light where all the colours of the rainbow can be seen and represents knowledge being transferred into wisdom, and an integration of heart, mind and body.
The ancient navigators reinvented themselves daily with wisdom as every day nature would throw up a new set of circumstances to meet.
I think now through creating deeper stories, we can use our narratives to grow our wisdom, and reinvent ourselves ongoingly as we move through forever changing circumstances.

Everyone I speak with, young and old, thinks the world is moving faster and faster every day.

I used to think only older people thought that, and when I was young, summers could seem to last forever and my sense of time was different. Who knows? There is undoubtedly some science and definitely some spirituality around about the world speeding up.
But the world has never been still. The planet turns, the moon pulls, and the sun rises and sets. And each day is unique and brand new. Each day is a reinvention.
I am excited to be part of the Reinvention Summit that has been set up out of New York as an international online conference of storytellers. Some of the world’s top experts on storytelling in business, in personal lives and society are speaking. There are a number of really cool things about this summit. One is that you can dip in and of it either live or recorded at any time for ten days from November 11. The second thing is it is being designed as I write by the speakers and the participants, and it is so accessible at $11.11 US for a basic registration. And lastly the greatest thing is the content and the theme, breathing life into building the practice of storytelling, to know and share oneself, and integrate and onlygoingly reinvent one self.
It makes total sense to me, in body mind and spirit that in this fast moving age, we turn to our most ancient form of communication, story. It is time to reinvent and reintegrate ourselves, to build stories that connect the whole of our selves with others.