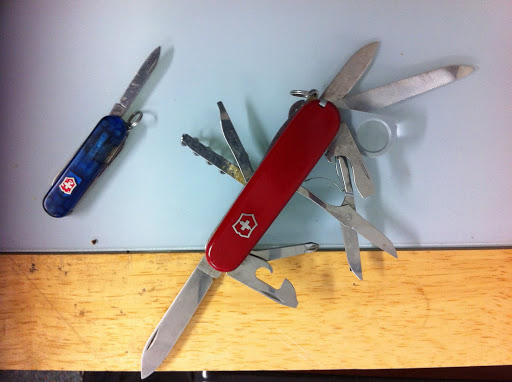 It amazes me how we get so fixated on quantity over quality. I reckon we have a fear of quality; being able to produce it, or being deserving enough to receive it.

Somehow we justify our existence by doing more, and make it seem that the quantity of our work is of greater value. And then I think of a Swiss Army knife. The one with 20 + gadgets seems impressive, but it is the one with only one blade that I use over and over again. It is half rusty, after a fishing trip where it was the only knife we had, and now sits on my key ring and is always at hand.

We take the same attitude into the stories we tell; the stories about ourselves, our work and our lives. We think the more we bombard people with information and stuff, the better the story.

I still catch myself doing this, even after years of working in the radio industry creating very short sound bites, often only 5 to 7 second long.

Today it is a ‘must’ to have a public profile in social media, and so it has become critical that we learn to tell our stories in a short space; short and sweet.

Think of a great soup or a great sauce in cooking. The tastiest are rendered down to their essence. So too, with stories. In film script writing they call it ‘killing your darlings’ where you have to get ready with the razor and take out any fat in your story, even if it is a piece you really love.

Take a hard look at your stories. What is critical to it making sense? What can you really do without. If you find it hard to self edit, work with a trusted friend or colleague, someone you know can be blunt and ‘to the point’ . 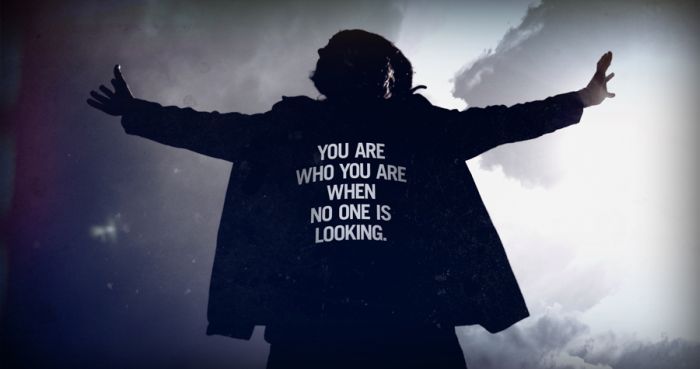 I find it funny how sometimes the “Making Of’ movies can end up more interesting than a movie itself.

We always love to watch the ‘directors cut’, the outtakes, the ‘unauthorised’ version of a story.

We crave the authentic, the uncut version, the real oil. So why is that?

I think we’ve become a little bit too clever for our own good. We can craft stories in any medium, and manipulate how they look and feel. We can package reality any way we want.

But it is the ‘backstory’, without the gloss and polish that we often long remember.

Throughout my career as a radio journalist and documentary maker, the best stories in an interview would often be told after the microphone was turned off. People would be naturally cautious or perform while being recorded, but at their ease talking ‘off the record ‘.

The greatest documentary makers have people so much at ease, they are themselves as if the interviewer or camera isn’t there.

We love those ‘fly on the wall’ documentaries and reality TV shows because we consider it’s the real thing.

It is time we all totally merged, integrated ourselves in our personal and professional lives, and got brave about telling the good, the bad, and the ugly of what is really going on.

If we own the ‘backstory’ of our lives and work, the mistakes, the fears, the uncertainties, then we will build trust, higher performing teams and greater communities.

If we own and tell our backstory, who we are on and off the record, we have nothing left to hide and we can engage and work with others without any baggage or anything hidden.

We are surrounded by the ‘social’ media of our times. Bringing backstory to social media is what it is all about. People don’t want stories that are all gloss or all gloom.

So stop and think about some of the biggest mistakes or challenges of your life. What did you learn? Tell stories about your journey, your weaknesses as well as your strengths.

It might take a little courage, but anything worth learning in life requires a little discomfort.

Owning and telling your backstory just might be the pathway to the happiness and success in life you desire. 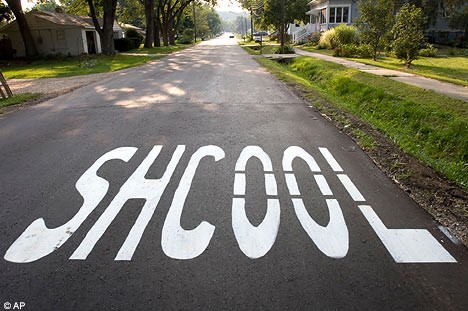 The first time I faced a big audience I bombed.

Not only did I bomb, but I threw in the towel and totally gave up.

It was a high school election for student president.

After fumbling the mic on the mic stand, I froze, and then told the audience to vote for the other candidate.

It was the most humiliating moment of my life.

I will never forget the sea of expectant faces, friends, enemies, waiting for me to rock the house. It never happened.

I had enrolled all the ‘cool kids’ around the school with talk of a campaign to allow smoking and hopefully alcohol in the common room for seniors. As if that was ever going to happen. It was the first time a ‘non-nerd’ had given the leadership a crack.

So the day of the assembly of 600 or so students, I had not prepared a single word, a single policy, a joke, a one liner, or anything. I thought I would wing it.

So fast forward 18 months. I am broadcasting live to the country on nationwide radio about a major shipwreck off the Wellington Harbour.

I’ve been airlifted in by helicopter, staying in a lighthouse, and reporting on the rescue and salvage attempts. Experienced reporters have struggled. I won’t give up. I stake out the beach in horrendous weather, waiting for the ace salvage expert to be winched down to the beach, some hardy old guy from Singapore called Red. I get an exclusive interview.

I went on to a successful career as a radio journalist. I was never lost for words. I had written, on paper, or in my head, every script. That became a pattern for my professional career.

But it has been a two edged sword. As I shifted career in my 30s and engaged in a whole range of adventures and personal development opportunities, I started to see how constant dry runs of every interaction I had was spoiling spontaneity and being present.

Now as I have hit the wonderful milestone of turning 50, I am developing ‘being in the zone’; where I am prepared, spontaneous and present. It’s a great place to be, and highly effective.

So this is my story. It can be my bio. It can be my blurb, with a bit of an edit. It is totally me, I can own every sentence of it. And drill down into the varied learnings, and opportunities.

Is it a Blab, or Blah Blah Blah?

I don’t think so.

It’s genuine and authentic. It rings true. And people remember it.

The point of this story is the contrasts and the journey from failure to success. There are potentially many levels to this story. And there are chapters that can be teased out.

This has all become part of my life story. Getting your story straight, the good, the bad and the ugly, the personal and the professional is going to be critical in 2012. With social media everywhere, there is no place left to hide.