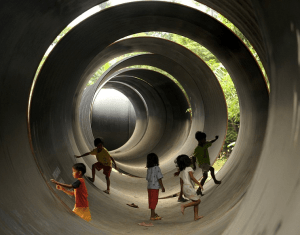 In the work of restoring streams and creeks there is a thing called ‘daylighting’. It refers to restoring waterways that have been diverted underground through pipelines and culverts. The daylighting occurs when they can once again flow above ground as water ways.

So with that in mind I want to talk about how we might bust open the pipeline of uselessness that is our education and career pathways for young people in Aotearoa New Zealand.

It is time to call it out. For more than 20 years we have established a pipeline of uselessness through education and workplaces in Aotearoa.

We have been educating people with information that does not turn into skills and does not equip them for jobs, workplaces and the world.

We have created endless tiers of management, where people do not produce anything.

Ask the majority of secondary, tertiary students, and employers if they think their education is equipping people well for work and the world, and they will offer you a resounding NO.

And yet it continues, on and on.

It all began to really turn to custard towards the end of the 20th century. As the new millennium dawned, some bright sparks in government decided they would jump on the neo-liberal machine and turn tertiary education into something that would make money… at any cost.

So to some extent, there were elements of this that were a good idea. Why not earn income from international students? And to do this one had to head higher up the rankings of universities internationally. Maybe that could be a good idea too.

However, as is often the way with government policies, it was a sledgehammer to crack a nut approach.

Around this time my own alma mata, AIT polytech, became AUT University, God Bless Them.

The transition showed just how myopically focused (and how much the same!) academics and bureaucrats can be. They made sure funding was all about research outputs and bums on seats, and sweet FA about quality teaching, or adapting curricula for fast changing world and employment markets.
Any sense of graduates gaining skills and mindsets for the new working world and fast emerging ‘gig’ economy were no where in sight.

And on their merry way they trundled through the 2000s.

Every year, tertiary education became less and less relevant to the market.

Every year more and more degrees and courses were created.

Every year universities, polytechnics and private providers spread campuses up and down the country, offering a multitude of courses that competed with one another, with pipelines to jobs that no longer existed, at least not in the form they were being taught.

Every year more and more graduates were ‘qualified’ for specific roles that were diminishing.

Every year, the expectations of graduates rose, as they sought employment in so called ‘management’ roles because these attracted better salaries, and after all that was their due, after paying thousands and thousands in student fees. Why wouldn’t you?

At one point it really came home to a group of us who were ex-industry professionals helping run a journalism programme that had become a degree at AUT when we noticed all the applicants for a media award for a ‘senior’ journalist were in their early to mid 20s. The career path to someone being ‘senior’ and then on to management had grown much faster, so that people could follow the salary band, all with limited experience.

And so we also started to see more and more of the “Peter Principle” , the concept dreamed up in the late 1960s as a satirical idea about managers rising to the level of their incompetence. The principle fast turned from satire to a sad reality.

And so we started to create legions and legions of managers every where, from government, to corporations to small businesses, to not-for-profits.

Everyone was a manager of something.

And to boot, the title and the role, the job description, the CV, the ability to be a manager was based on some inept psychometrics, in job interviews, and employment processes run by HR professionals that measured only very narrow elements of human beings and their ability and potential.

Argggh. I have sat on many an interview panel when all the assessment criteria were irrelevant and quite frankly useless, bearing no relationship to the actual job to do. Someone would end up employed who did not fit the job and was simply good at writing CVs and application letters and gaining qualifications.

Anyone with a foreign name or diverse life experiences usually had their CV tossed to the bottom of the pile.

This is nothing new of course in a colonial society, but it reached epidemic proportions over the past 30 years.

And now here was the further twist. These legions of inexperienced ‘managers’ were now making government and corporate policy, to employ more and more people like themselves, who had no experience at the ‘coal face’ but could write reports, and invent KPIs and measurements that all looked quite good on paper, and might get an A as an essay or uni assignment, or as a bright new shiny output of policy or strategy, but did not turn into the delivery of any useful services for the public, or the economy. These outputs never turned into any specific actions or changes.

And so on and one the roller coast trundled throughout the first decade and a half of the 21st century.

My goodness, what does Tier 4 do as opposed to Tier 7?

And in the hallowed halls of the council, people talk rather reverently about some on a higher tier as if they are a demi-God. Well I guess they wield more power and definitely bigger budgets and the ability to hire and fire, but divine presence?

So we wonder why the public service is in disarray and the corporate world terrifyingly out of touch with their customers and the public.

For a start they are increasingly faceless, lost way behind an automated customer service line. Their names, and their direct line phone numbers are never to be found. To face up and take responsibility is no where on the horizon, not even as a KPI.

I have painted a desolately picture here, and despite this I remain an optimist that these horrendous can change.

There are increasing glimmers that there is more and more awareness that these systems are broken. We hear more and more talk about adaptive leadership, empathy, authenticity, vulnerability and human centred organisations.

Here and there the talk turns to reality.

It does take a mindshift, not new skill sets. And there is a vast different.

Our individualised education and employment systems focus on gaining tools an and skill, without the wisdom of where and how to use them.

This requires a mindset shift, to being more human centres, and more focused on the collective than the individual. It requires a focus on how can the team as a whole succeed, and on measuring a wider range of successes.

We really have to redefine success, and we see glimmers in this around the new approaches being sought by government to measure more widely that GDP and solely economic metrics.

The idea that wellbeing and social impacts are equally important.

After all if we go to the origin of the word ‘economy’ it comes from the same root as ‘ecology’ which comes from the Greek word and concept EKOS, which is family.

So the whole point originally, was economics as a system for a family.

So paying attention to the collective, the whole, the organism of an organisation is the new ‘black.’

But we are only taking baby steps towards realising this after entrenched individualism and colonialism for hundreds of years.

The irony and the opportunity and the potential turn of the cycle is to wake up to the fact that all along there have been systems existing in this country that are perfectly suited as a model for a collective way of working, of honouring difference, and recognising the enormous potential when one or I shoud say when ‘we’ fully embrace the innovation, the inclusion and the ingenuity of working in a collective way to achieve far greater results, outcomes and outputs than we can achieve alone.

Aod so this most obvious of systems is Te Ao Māori.

Hello! It is such an absolute no brainer, and yet legislation, ideology, religion, and mainstream culture has repeatedly ignored, dismantled and totally supressed Te Ao Māori systems.

It is a devestatingly crying shame. For what better opportunity does Aotearoa have than to full embrace an ancient and timeless culture as it’s mainstream operating system.
How beautiful, elegant, smart and successful this can be.

Our niche on the world stage, our uniqueness, has always been based on Te Ao Māori, it has just never been acknowledged.

Our history of punching above our weight, of kiwi innovation has always had Te Ao Māori central to it as much as the zeal of European pioneers. And I romantically like to think that on a good day historically, there were no degrees of seperation between innovative pioneesr and an entrepreneurial tangata whenua.

Hello people, wake up. We have this most elegant and smart opportunity right in front of us. The rest of the world sees it and we don’t. We are admired and sought after around the globe and yet we still can’t see it, mumbling into our beards monosyllabically in the cultural cringe anti-tall poppy sentiments giving ‘all credit to the oppposition.’ What?????? How crazy is this false humility?
Really it is just passive-aggressive bullshit.

We can rise up the brilliant opportunities of the tikanga of Te Ao Māori as this main operating systems for our motu and ourselves.

We are gorgeous. And this place is gorgeous.

We can collectively embrace system changes that enable us to be the change we wish to see in the world.

Fundamentally, the changes that will enable more equity for more people to be fulfilled in their life and work will come from a place of love.

The concepts of aroha, of whakawhanaungatanga , of manaakitanga and kaitiakitanga are all about love, a universal love connecting, people, planet and the universe.

So daylighting our selves and our places in love is something that we can all commit to, it is a value beyond question, beyond debate, it is presencing our potential as human beings to evolve in love.